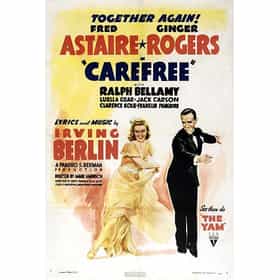 Carefree is a 1938 musical film starring Fred Astaire and Ginger Rogers. With a plot similar to screwball comedies of the period, Carefree is the shortest of the Astaire-Rogers films, featuring only four musical numbers. Carefree is often remembered as the film in which Astaire and Rogers shared a long on-screen kiss at the conclusion of their dance to "I Used to Be Color Blind," all previous kisses having been either quick pecks or simply implied. Carefree was a reunion for the Astaire and Rogers after a brief hiatus following Shall We Dance and six other previous RKO pictures. The next film in the series, The Story of Vernon and Irene Castle, would be their final RKO film ... more on Wikipedia

Carefree is ranked on...

Carefree is also found on...