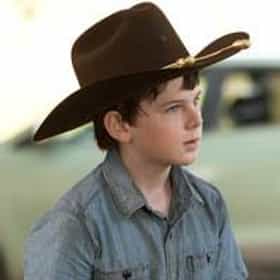 Carl Grimes is a fictional character from the comic book series The Walking Dead and is portrayed by Chandler Riggs in the American television series of the same name, which airs on AMC in the United States. The character was created by writer Robert Kirkman and artist Tony Moore, and debuted in The Walking Dead #2 in 2003. In both forms of media, Carl is the son of primary protagonist Rick Grimes and is one of the longest-surviving characters. In the comic book series, Carl begins as a normal and innocent child, but, as the events of the new world order force him to grow up, he becomes colder and competently makes sometimes brash decisions for the good of his group of friends. The ... more on Wikipedia

Carl Grimes is ranked on...