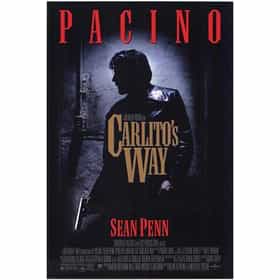 Carlito's Way is a 1993 American drama film directed by Brian De Palma, based on the novels Carlito's Way and After Hours by Judge Edwin Torres. The film adaptation was scripted by David Koepp. It stars Al Pacino and Sean Penn, with Penelope Ann Miller, Luis Guzmán, John Leguizamo, and Viggo Mortensen in supporting roles. The film's featured song, "You Are So Beautiful", was performed by Joe Cocker. The film follows the life of Carlito Brigante after he is released from prison and vows to go straight and retire. However, unable to escape his past. ... more on Wikipedia

Carlito's Way is ranked on...

Carlito's Way is also found on...