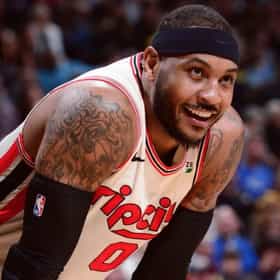 Carmelo Kyam Anthony (born May 29, 1984) is an American professional basketball player who is currently a free agent but last played for the Houston Rockets of the National Basketball Association (NBA). He has been named an NBA All-Star ten times and an All-NBA Team member six times. He played college basketball for the Syracuse Orange, winning a national championship as a freshman in 2003 while being named the NCAA Tournament's Most Outstanding Player. After one season at Syracuse, Anthony entered the 2003 NBA draft and was selected with the third overall pick by the Denver Nuggets. While playing for Denver, he led the Nuggets to the playoffs every year from 2004 to 2010; the team won ... more on Wikipedia

Carmelo Anthony is ranked on...

Carmelo Anthony is also found on...