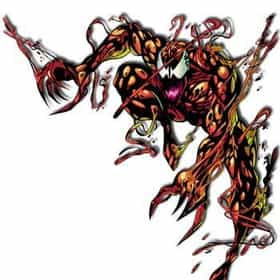 Carnage is a fictional supervillain appearing in comic books published by Marvel Comics, usually as an enemy of Spider-Man. The character first appeared as Cletus Kasady in The Amazing Spider-Man #344 and as Carnage in The Amazing Spider-Man #360. He was created by writer David Michelinie and artists Erik Larsen and Mark Bagley, based on elements of the precursor character Venom. In 2009, Carnage was ranked as IGN's 90th Greatest Comic Book Villain of All Time. ... more on Wikipedia

Carnage is ranked on...

#9 of 110 People who voted for Carnage... also upvote Spider-Man on The Greatest Marvel Avengers Characters of All Time also upvote Deadpool on The Best Comic Book Superheroes of All Time The Greatest Marvel Villains & Enemies Ever 405.8k VOTES The best Marvel villains are the men and women (not to mention any aliens, robots, and even siblings of heroes) at the root ...
#2 of 17 The Spookiest Villains in Comics 128.8k VOTES Who needs the likes of Michael Myers, Freddie Krueger, and Jason when we have villains in comics that are just as scary, if ...
#2 of 50 The Best Carnage Versions Of All Time 4k VOTES Carnage is arguably one the best villains in all of Spider-Man rogue's gallery, and that is saying quite a bit consider...
#2 of 19 The Craziest Comic Book Characters, Ranked 16.2k VOTES You almost have to be insane to be a comic book villain. They concoct grandiose schemes despite numerous failures, only to f...
#3 of 28 The Most Terrifying & Scariest Villains In Comics 58.3k VOTES Does the Scarecrow bring the fear out of you? Does the thought of Venom being around you make you cringe? Does Batman's Vict...
#12 of 31 The Best Red Characters 902 VOTES We’re ranking the best red characters of all time. From Daredevil to Deadpool, Mario and even Optimus Prime, this list ...
#4 of 84 People who voted for Carnage... also upvote Venom on The Greatest Marvel Villains & Enemies Ever The Best Spider-Man Villains 104.4k VOTES Here is the list of the greatest Spider-Man villains and enemies Peter Parker has ever had. This Spider-Man villain list inc...
Your Favorite Marvel Characters: Where Are They Now? 1.3M VIEWS Marvel Comics has a celebrated 75+ year history in the comic book industry, having brought readers characters that have surv...
#2 of 14 The Greatest Symbiote Characters of All Time 4.7k VOTES For this poll we've created a list of the greatest symbiotes of all time, featuring symbiotes you know from movies, televisi...