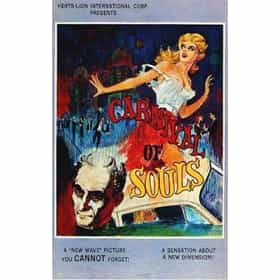 Carnival of Souls is a 1962 independent horror film starring Candace Hilligoss. Produced and directed by Herk Harvey for an estimated $33,000, the film did not gain widespread attention when originally released, as a double feature with The Devil's Messenger; today, however, it is a cult classic. Set to an organ score by Gene Moore, Carnival of Souls relies more on atmosphere than on special effects to create a mood of unease and foreboding. The film has a large cult following and is occasionally screened at film and Halloween festivals. It has been cited as an important influence on the films of both David Lynch and George A. Romero. ... more on Wikipedia

Carnival of Souls is ranked on...

#261 of 804 The Best Horror Movies Of All Time 1.1M VOTES Horror movies, ranked by adrenaline junkies worldwide. Anyone can vote on this CrowdRanked list, and can even add your own f...
#12 of 58 Free Movies! The Best Films in the Public Domain 12.2k VOTES The best free movies in the public domain number among some of the best movies of all time, and since their copyrights have ...
#22 of 22 The Most Pretentious Horror Movies Ever Made 6.9k VOTES When an intelligent horror film is released, fans of the genre often judge it by its level of pretension. Movies like&n...
#1 of 15 15 Obscure Horror Movies from the '60s You Need to See Right Now 991 VOTES The 1960s was a great decade for the horror genre. Sixties' horror films pioneered many innovations, such as the introductio...
#10 of 27 The Best Horror Movies About Carnivals and Amusement Parks 1.7k VOTES Is there anything creepier than an abandoned carnival? Since the answer is no, we're ranking the best horror movies about ca...
#3 of 12 The Most Ripped-Off Horror Movie Twists 777 VOTES While most horror movies end with an ostensibly-happy return to the status quo - the villain defeated, the demon exorcised, ...
#23 of 52 The Best Gothic Horror Movies 6.3k VOTES Gothic horror (also commonly referred to as gothic fiction) is a genre of literature or film that typically combines horror,...
#47 of 115 The Best Old Horror Movies 33.2k VOTES The best old horror movies include classic scary films designed to terrify. Early horror movies tapped into our deepest fear...
#109 of 207 The Best Classic Horror Movies 84.6k VOTES If you’re a true horror film enthusiast then you’ll recognize these famous directors and the movies that earned them worldwi...
Horror Movies Rob Zombie Has Awarded His Personal Stamp Of Approval 46.5k VIEWS It’s Friday night, you’re spending hours scrolling around looking for a scary movie to watch, but nothing is grabbing your a...
The Most Famous Horror Villain From Every State 20.8k VIEWS Who is the most popular horror villain of all time? The anser to that question is subjective and thus difficult to answ...

Carnival of Souls is also found on...