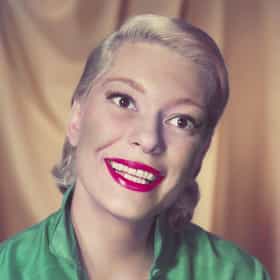 Carol Elaine Channing (January 31, 1921 – January 15, 2019) was an American actress, singer, dancer, and comedian, known for starring in Broadway and film musicals. Her characters usually radiated a fervent expressiveness and an easily identifiable voice, whether singing or for comedic effect. Channing began as a Broadway musical actress starring in Gentlemen Prefer Blondes in 1949 and Hello, Dolly! in 1964, and winning the Tony Award for Best Actress in a Musical for the latter. She revived both roles several times throughout her career, most recently playing Dolly in 1995. She was nominated for her first Tony Award in 1956 for The Vamp, followed by a nomination in 1961 for Show Girl. ... more on Wikipedia

Carol Channing is ranked on...

#43 of 65 The Greatest Gay Icons in Music 59.5k VOTES List of the Greatest Gay Icons in Music, ranked by fans. Gay icons come in all shapes and sizes. Some are fiercely bold diva...
#13 of 1,445 Celebrity Death Pool 2018 477.7k VOTES Welcome to Celebrity Death Pool 2018! In increasingly uncertain times, there remains one constant in life - we all die. Cele...
#8 of 53 People who voted for Carol Channing... also upvote Star Trek Franchise on The Greatest Sci-Fi Movies of All Time also upvote Harry Potter Franchise on The Most Rewatchable Movies The Best Living Actresses Over 80 57.8k VOTES The best living actresses over 80 (or close to it) include the classic beauties who headlined films and television shows o...
#43 of 862 Celebrity Death Pool 2016 370.1k VOTES Celebrity death pool 2016: Here's a large list of celebrities we think just might die this year. The only certainties in l...
#1 of 11 The Best Female Stand Up Comedians of the '70s 1.3k VOTES The best 70s stand up comedians were often female, including Joan Rivers and Phyllis Diller, both of whom have unfortunately...
#9 of 74 Who Was America's Grandma in 2015? 6.1k VOTES Here’s a statement that no one can deny: grandmas are the best. And since grandmothers are the best things on the planet, it...
#33 of 159 Celebrity Death Pool 2013 15.4k VOTES Every year we lose more and more famous celebrities. Whether it's from natural causes, suicide, drug abuse or just plain cra...
#25 of 185 Celebrity Death Pool 2014 31.5k VOTES Celebrity death pool 2014: Here's a complete list of celebrities who just might die in 2014. Every year we lose more and mor...
Famous People Named Carol 31.4k VIEWS List of famous people named Carol, along with photos. How many celebrities named Carol can you think of? The famous Carols b...
Famous People Named Carolyn 6.2k VIEWS If your name is Carolyn, then you're in some great company. Here's our list of the most famous people named Carolyn, includi...
Golden Apple Most Cooperative Actress Winners 843 VIEWS The Golden Apple Award for Most Cooperative Actress was awarded to those entertainers recognized for being easy to work with...
Actors and Actresses Who Died in 2019 133.8k VIEWS UPDATED: Read about actors and actresses who died in 2020.  Movies play a key part in so many people's lives, and the...
Famous People with Raspy Voices 447.4k VIEWS When a strong man has a raspy voice, it can make him seem more rugged and tough. A beautiful woman with a husky voice m...
18 Famous Actresses Who Won Tonys for Musicals 4k VIEWS List of Famous Actresses Who Won Tonys for Musicals. Several famous Hollywood actresses have won Tony Awards for their perfo...

Carol Channing is also found on...