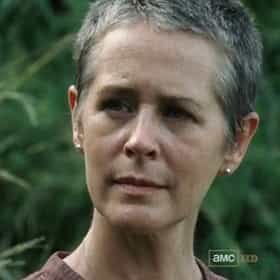 Carol Peletier, or simply Carol, is a fictional character from the comic book series The Walking Dead and is portrayed by Melissa McBride in the American television series of the same name. Carol is introduced in the comics in the third issue of the first volume, "Days Gone Bye", in 2003, and the third episode of the first season of the television series in 2010, as a meek housewife and mother of Sophia at the survival camp in Atlanta, Georgia. Initially a recurring cast member, McBride was upgraded to a series regular position at the onset of the second season, and the character's role has predominantly increased since the fourth season. The character's arc has been ... more on Wikipedia

Carol Peletier is ranked on...

#635 of 818 The Most Annoying TV and Film Characters Ever 1.5M VOTES You know them. You hate them. Honestly, who knows why these characters even exist. Did someone think they were funny? M...
#4 of 97 The Best Female Characters on TV Right Now 151.3k VOTES Some of the greatest characters in this new golden age of TV are female right now, and their characters span centuries, cult...
#3 of 93 The Most Hardcore Current TV Characters 290.4k VOTES The most badass current TV characters include men and women who, though they do not exist in reality, are fearless in today'...
#43 of 44 Fictional Characters You'd Leave Your Woman For 56.4k VOTES She’s the woman of your dreams and she just killed a dude with a bow and arrow. She’s totally not real but if you were facin...
#1 of 64 People who voted for Carol Peletier... Women are 3x more likely to vote for this Current TV Characters You Would Want to Be BFFs With 15.5k VOTES Friendship has its privileges. If we’re lucky enough, we all have that one special friend who we can rely on to get us both ...
#2 of 20 The Strongest Survivors On 'The Walking Dead,' Ranked 2.3k VOTES AMC's The Walking Dead (TWD) television series has been going strong with nine seasons and more than 130 episodes ...
#2 of 23 The Walking Dead Characters Most Likely To Survive Until The End 38k VOTES WARNING: Spoilers abound. If you’re caught up on Season 9, you should be fine, though. Walking Dead fans spend about 60% o...
#7 of 62 The Best and Strongest Women Characters 24k VOTES Looking for more strong women characters in your life? This list of awesome women in literature, TV, and film has all kinds....
#20 of 25 The Walking Dead Season 7 Death Pool 61.9k VOTES Are you ready for The Walking Dead season 7 death pool? From the season premiere to the finale, fans can expect many sh...
#14 of 19 The Walking Dead Season 5 Death Pool 38.6k VOTES *SPOILER ALERT!* Chances are if a character isn't on this list of characters who will die on The Walking Dead season 5, they...