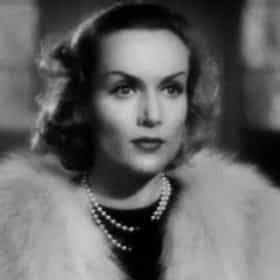 Carole Lombard (born Jane Alice Peters; October 6, 1908 – January 16, 1942) was an American film actress. She was particularly noted for her energetic, often off-beat roles in the screwball comedies of the 1930s. She was the highest-paid star in Hollywood in the late 1930s. Lombard was born into a wealthy family in Fort Wayne, Indiana, but was raised in Los Angeles by her single mother. At 12, she was recruited by the film director Allan Dwan and made her screen debut in A Perfect Crime (1921). Eager to become an actress, she signed a contract with the Fox Film Corporation at age 16, but mainly played bit parts. She was dropped by Fox after a car accident left a scar on her face. ... more on Wikipedia

Carole Lombard is ranked on...

#133 of 940 People who voted for Carole Lombard... People over 50 are 2x more likely to vote for this The Best Actresses in Film History 1.1M VOTES The best actresses ever are ranked here in this list of the best actresses in film history. These are the greatest actresses...
#695 of 925 People We Wish Were Still Alive 3.3M VOTES RIP to our world's greatest achievers, those who changed the way we live and the ways we thought. This list of people we wis...
#321 of 2,003 People who voted for Carole Lombard... People on the West Coast are 2x more likely to vote for this The Greatest Actors & Actresses in Entertainment History 1.7M VOTES The best actors and actresses of all time, male and female, ranked by film fans worldwide. This list of greatest actors and ...
#38 of 80 The Hottest Classic Actresses 84.1k VOTES A classic actress is usually defined as actresses from the "Studio Era" in Hollywood wherein a studio outright bou...
#136 of 232 The Greatest American Actresses Of All Time 186.8k VOTES It takes a lot to make a movie great. There has to be excellent writing, production, direction, editing, and of course, acti...
#116 of 312 Which Actor Would You Bring Back for One Final Movie? 189.9k VOTES We asked, you answered. Fans of the Ranker Facebook page chose which dead actors they’d like to bring back to life for just ...
#28 of 50 Historical Female Sex Symbols, Ranked By The Likelihood They Would Be Sex Symbols Now 2.4k VOTES The world's first female sex symbol was arguably Eve, whatever she truly looked like. Biblical references aside, howeve...
#28 of 31 Famous Women Who Look Like Dolls 33k VOTES A list & photo gallery of famous women who look like dolls. Gigantic eyes, porcelain skin, and dainty pointy chin = doll...
#20 of 24 The Hottest Pin-Up Girls from the 1940s 18.5k VOTES Pin-up girls are models with widely distributed, mass produced photo spreads, usually on both sides of the page, that soldie...
Celebrities You Didn't Know Use Stage Names 1.9M VIEWS List of celebrities with stage names, loosely ranked according to fame and popularity. It's tough to break into show busin...
35 Famous Movie Stars of the 1930s 115.5k VIEWS Lights, camera, action! These famous movie stars were the very definition of glitz and glamour in in the 1930s. Despite the ...

Carole Lombard is also found on...