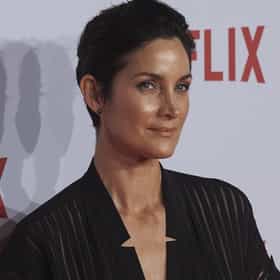 Carrie-Anne Moss is ranked on...

#362 of 940 The Best Actresses in Film History 1.1M VOTES The best actresses ever are ranked here in this list of the best actresses in film history. These are the greatest actresses...
#178 of 389 The Most Overrated Actors Of All Time 1.2M VOTES This list of the most overrated actors of all time, has been ranked by critics and fans from all over the world. Actors are ...
#126 of 162 Hottest Female Celebrities in Their 40s in 2015 91.9k VOTES Time is tough on all of us, but it’s especially tough on women who make their living - at least partially - on their appeara...
#38 of 412 The Hottest Women Over 40 in 2013 603.7k VOTES This is an Ultimate List of the hottest women over 40. It's hard to believe that some of these well known women are over 40,...
#135 of 149 The All-Time Greatest Action Stars 312.9k VOTES Who are the all-time greatest action stars? This list includes some of the biggest names in movie history, and each actor or...
#26 of 38 The Most Stunning Women in Action Movies 328.1k VOTES The beautiful women in action movies manage to command the screen with their physical abilities and their acting skills...
#48 of 50 The Hottest Canadian Actresses 63.6k VOTES A list of the hottest Canadian actresses. These are beautiful women from the Great White North that have caught the attentio...
Celebrities Who Study Martial Arts 152k VIEWS List of celebrities who know martial arts, loosely ranked by fame and popularity. Several famous actors, actresses, musician...
Famous Vegetarians and Vegans 20k VIEWS Vegetarian celebrities, famous vegans, vegan celebrities and famous people who are eating vegetarian. You'd be surprised who...

Carrie-Anne Moss is also found on...