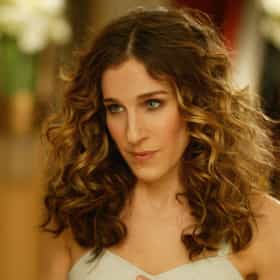 Caroline Marie “Carrie” Bradshaw (born October 10, 1968) is the protagonist of the HBO franchise Sex and the City, portrayed by Sarah Jessica Parker. She is a semi-autobiographical character created by Candace Bushnell, whose book Sex and the City was adapted into the franchise. Carrie is a New York City columnist and fashionista; her weekly column, "Sex and the City," provides the narration for each episode. In the CW prequel series The Carrie Diaries, Carrie was portrayed by AnnaSophia Robb. When the series premiered, the character was praised by critics as a positive example of an independent woman in the vein of Mary Tyler Moore. However, retrospective analysis tends to ... more on Wikipedia

Carrie Bradshaw is ranked on...

#20 of 92 People who voted for Carrie Bradshaw... Women are 2x more likely to vote for this also upvote Lord of the Rings Franchise on The Best Movies of All Time The Best Will-They-or-Won't-They Couples in TV History 105.8k VOTES List of the best will-they-or-won’t-they couples in TV history, current or past. These ‘will they or won’t they?’ couples ha...
#172 of 1,086 People who voted for Carrie Bradshaw... People in the Central US are 2x more likely to vote for this Women are 2x more likely to vote for this The Greatest Female TV Characters of All Time 1.1M VOTES Who are the greatest female TV characters of all time? This list includes some of the greatest television characters in...
#5 of 20 The Worst TV And Movie Wedding Dresses 57.2k VOTES There are clearly a lot of gorgeous wedding dresses to swoon over in both movies and TV. That's mainly why when a ...
#117 of 142 The Greatest Female TV Role Models 46.7k VOTES List of the greatest female TV role models. Here are the rankings for the best female characters for your daughter to look u...
#20 of 21 Actors Who Played the Same Character at Different Ages 518k VOTES When movie timelines span decades and lifetimes, it's crucial for casting directors to pick actors and actresses that look t...
#18 of 29 The Coolest Fictional Characters from New York 1.9k VOTES There are some pretty cool dudes and ladies in New York City. This list ranks all the coolest fictional characters from New ...
#15 of 17 TV Love Interests Who Could Do Better 2.4k VOTES As in real life, TV romance is hardly perfect. But some small-screen relationships seem especially mismatched, and...
#4 of 12 TV And Movie Characters Who Can't Afford Their Homes 2.2k VOTES Sometimes, Hollywood does a bad job presenting realistic portrayals of working-class existence; for example, a sle...
#6 of 39 The Most Insufferable Extroverted Characters on TV 2.6k VOTES Extroverts aren't all bad and sometimes their bold, outgoing nature is an asset to social situations and work environments. ...
#1 of 20 TV Characters Way Too Poor To Realistically Afford Their Lifestyles 32.6k VOTES When you're sitting through the best TV shows to speed watch, it’s natural to suspend disbelief. So when a TV character...
#9 of 14 The Best Woke-Up-Like-This Hair And Makeup In TV And Film 1k VOTES Woke-up-like-this makeup in movies and television provides another unrealistic goal for the common man or woman to...
#6 of 10 The Greatest Sets of BFFs in All of '90s TV 1.8k VOTES We've rounded up all your favorite BFFs from '90s television - all your favorite twosomes and cliques that once ruled the ...
#30 of 35 The Greatest Journalist Characters in Film 630 VOTES "I'm mad as hell, and I'm not going to take this anymore!" That line – bellowed by Peter Finch's news anchor Howar...
#20 of 47 The Greatest Perpetually Single Women in TV History 8.8k VOTES List of the best female characters who are perpetually single in television history, as ranked by television critics and fan...
#6 of 18 The Greatest Novelist Characters in Film 89 VOTES Whether they're successful authors or beginners struggling to complete their first manuscripts, fictional novelists have cap...
#2 of 19 The Best Fur Coats in Pop Culture 970 VOTES Fur coats are the number one way to stay warm, feel glamorous, or make a statement - just ask any of the people on this list...
28 Famous TV Roles That Were Almost Played by Someone Else 655.6k VIEWS Casting a good TV show can be tricky. There are lots of characters and both producers and networks want to get the chemistry...

Carrie Bradshaw is also found on...