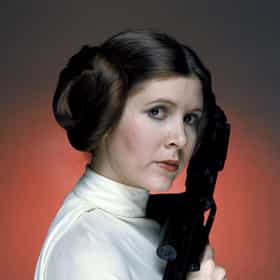 Carrie Frances Fisher (October 21, 1956 – December 27, 2016) was an American actress, writer, and comedian. Fisher is best known for playing Princess Leia in the Star Wars films, a role for which she was nominated for four Saturn Awards. Her other film credits include Shampoo (1975), The Blues Brothers (1980), Hannah and Her Sisters (1986), The 'Burbs (1989), When Harry Met Sally... (1989), Soapdish (1991), and The Women (2008). She was nominated twice for the Primetime Emmy Award for Outstanding Guest Actress in a Comedy Series for her performances on the television series 30 Rock and Catastrophe. She was posthumously made a Disney Legend in 2017, and in 2018 she was awarded a ... more on Wikipedia

Carrie Fisher is ranked on...

#76 of 940 The Best Actresses in Film History 1.2M VOTES The best actresses ever are ranked here in this list of the best actresses in film history. These are the greatest actresses...
#367 of 2,003 The Greatest Actors & Actresses in Entertainment History 1.7M VOTES The best actors and actresses of all time, male and female, ranked by film fans worldwide. This list of greatest actors and ...
#122 of 470 Famous Women You'd Want to Have a Beer With 785.3k VOTES If given the opportunity to sit down for a beer with any famous female figure, which famous women would you most want to get...
#475 of 1,549 The Most Beautiful Women in the World 5.7M VOTES Naming the most beautiful women in the world is a difficult task because of how subjective it is. Beauty is a mixture of phy...
#32 of 50 The Most Beautiful Women From The '60s And '70s 648.7k VOTES These photos of your dad's childhood crushes are here as a reminder that some of today's stunning moms were yesterday's...
#364 of 511 People who voted for Carrie Fisher... Men are 2x more likely to vote for this Celebrities Nobody Cares About Anymore 3.4M VOTES Some of the greatest actors of all time have, in recent days, turned into a bunch of washed-up hacks that would be somehow b...
#117 of 163 The Best Hallmark Channel Actresses 259.5k VOTES They're the stars, the moms, the sisters, and the best friends. These Hallmark Channel actresses bring Hallmark Channel Orig...
#31 of 312 Which Actor Would You Bring Back for One Final Movie? 190.4k VOTES We asked, you answered. Fans of the Ranker Facebook page chose which dead actors they’d like to bring back to life for just ...
#21 of 22 Celebrities With The Weirdest Twitter Accounts 837 VOTES Let's be frank for a moment: despite what you may have heard, celebrities are not like us. Yes, they (probably) put their pa...
#7 of 24 Times Actors Gave Unexpectedly Honest Answers To Interview Questions 165.9k VOTES Hollywood may be the land of make-believe, and celebrity interviews might often be nothing more than shameless self-promotio...
#6 of 31 Awesome Photos Of Celebrities With Their Stunt Doubles 383.6k VOTES Whether or not you're a fan of action movies, you’ve got to admit that there’s something awesome about a great stunt. The ir...
#1 of 44 The Best Fish Things That Are Not Really Fish 3k VOTES Ranker has fish in the office. They are real fish with real bodies and real lives, real dreams, and real heartbreak. This li...
#17 of 26 The Best Authors Who Narrate Their Own Audiobooks 127 VOTES In this fast-paced world we live in, it seems not everyone has time to actually sit down and read a book. Though audiobooks ...
#3 of 17 The Most Surprising Early Work by Famous Screenwriters 328 VOTES Sometimes a writer sticks to a general style or genre, and do it so well they become the icon of that genre. Like Charlie Ka...
Hallmark Channel Actors and Actresses 156.9k VIEWS The Hallmark Channel may have a primary group of talent they work with but they also employ a wide range of actors you will ...
Every Person Who Has Hosted 'Saturday Night Live' 52.4k VIEWS Live from New York! It's Saturday Night! This is a list of all Saturday Night Live hosts, in reverse order,...
Celebrities Who Have Starred on Broadway 13.2k VIEWS Most actors don't just stick to the screen. What celebrities have also been in Broadway plays? The celebrities on this list,...
#17 of 64 The Best People Who Hosted SNL In The '70s 7.4k VOTES Saturday Night Live might not have started out a hit but as the 1970s slipped past, SNL cemented itself into the TV viewing ...
Celebrities Who Died in 2016 1M VIEWS   If you’re feeling sentimental and looking for celebrity deaths today, look no further than this list of celebrities...
15 Straight Celebrities Who Had Gay Spouses 494.2k VIEWS This list contains information about straight celebrities who had gay spouses, loosely ranked by fame and popularity. Severa...
Who Was The Hollywood "It Girl" The Year You Were Born? 37.3k VIEWS While no one can remember much about their birth, it’s sometimes fun to find out facts about the year you came into the worl...
Awesome Celebrities Who Shut Down Their Body Shamers 72.4k VIEWS By now we all know that body shaming is so not cool. It takes a lot of self-confidence and inner peace to battle people who ...
Actors and Actresses Who Died in 2016 778.3k VIEWS   Car accidents, drug overdoses, and other surprising deaths make up the bulk of the actors and actresses who died to...
The Most Famous Actresses of the 70s (Then and Now) 637.4k VIEWS Here's a look at what movie stars and actresses from the 1970s were doing then, and what they're up to now. Some have contin...
Famous People Describe What It's Like Living With Depression 14.4k VIEWS Depression is an ailment that affects many people worldwide. When celebrities speak out about their depression, it's a remin...
Paul Simon Loves and Hookups 1.4k VIEWS Who is Paul Simon dating? Many famous women have dated Paul Simon, and this list will give you more details about these luck...
Celebrities Turning 60 in 2016 1.5M VIEWS Who says Hollywood is only for the young? Tell that to the many famous stars turning 60 this year. From Tom Hanks to Randy...

Carrie Fisher is also found on...