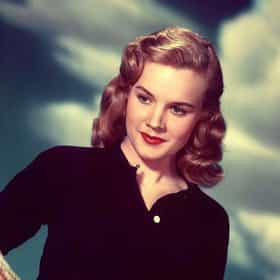 Carroll Baker (born May 28, 1931) is a retired American actress of film, stage, and television. Throughout the 1950s and 1960s, Baker's range of roles from young ingénues to brash and flamboyant women established her as both a pin-up and serious dramatic actress. After studying under Lee Strasberg at the Actors Studio, Baker began performing on Broadway in 1954. From there she was recruited by director Elia Kazan to play the lead in the adaptation of two Tennessee Williams plays into the film Baby Doll in 1956. Her role in the film as a coquettish but sexually naïve Southern bride earned her BAFTA and Academy Award nominations for Best Actress, as well as a Golden Globe ... more on Wikipedia

Carroll Baker is ranked on...

#1035 of 1,549 People who voted for Carroll Baker... People in the Northeast are 3x more likely to vote for this The Most Beautiful Women in the World 5.7M VOTES Naming the most beautiful women in the world is a difficult task because of how subjective it is. Beauty is a mixture of phy...
#305 of 771 American Public Figures Who Are National Treasures 229.7k VOTES America's national treasures work in different fields, are of different generations, and all have different stories to ...
#17 of 25 The Most Stunning Classic Blonde Bombshells 27.9k VOTES We've all heard the phrase, "Blondes have more fun" and seen the classic Marilyn Monroe film, Gentlemen Prefer Blo...
#10 of 25 The Most Beautiful Pin-Up Girls of the '60s 360 VOTES Most of the memorable pin-up models gained popularity in the 1960s. Sharon Tate, Raquel Welch, and Yvonne De Carlo were...
#469 of 862 Celebrity Death Pool 2016 370.1k VOTES Celebrity death pool 2016: Here's a large list of celebrities we think just might die this year. The only certainties in l...
Famous People Whose Last Name Is Baker 8.8k VIEWS Being a fairly common name, it's no surprise there are a lot of famous people with the last name Baker. Do you recognize all...

Carroll Baker is also found on...