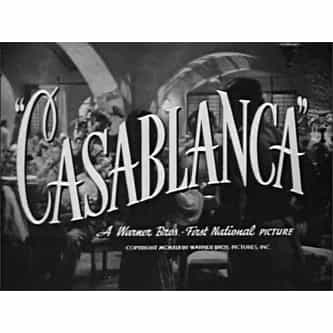 Casablanca is a 1942 American romantic drama film directed by Michael Curtiz and based on Murray Burnett and Joan Alison's unproduced stage play Everybody Comes to Rick's. The film stars Humphrey Bogart, Ingrid Bergman, and Paul Henreid; it features Claude Rains, Conrad Veidt, Sydney Greenstreet, Peter Lorre, and Dooley Wilson. Set during World War II, it focuses on an American expatriate who must choose between his love for a woman and helping her Czech Resistance leader husband escape ... more on Wikipedia

Casablanca IS LISTED ON