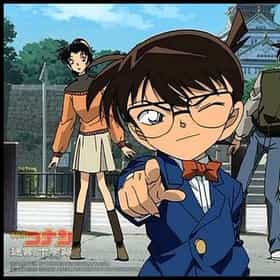 Case Closed, known originally as Meitantei Conan, is a Japanese detective manga series written and illustrated by Gosho Aoyama. The series is serialized in Shogakukan's Weekly Shōnen Sunday since January 19, 1994, and has been collected into 84 tankōbon volumes. Due to legal considerations with the name Detective Conan, the English language release was renamed to Case Closed. The story follows Jimmy Kudo, an amateur detective who transformed into a child while investigating the Black Organization. Meitantei Conan received an anime adaptation by Yomiuri Telecasting Corporation and TMS Entertainment. The anime resulted in animated feature films, original video animations, video games, ... more on Wikipedia

Case Closed is ranked on...

#38 of 113 The Best Anime Streaming on Netflix 403.2k VOTES This is a list of the best anime on Netflix, voted on by over 70,000 anime fans like you and updated monthly. For new a...
#111 of 318 The Best English Dubbed Anime of All Time 983.7k VOTES If you're one of those people who only watches anime in Japanese, we don't blame you. English dubs can really ruin a series ...
#62 of 88 The 30+ Best Shounen Anime Of All Time 586.4k VOTES Shounen (or "shōnen") is one of the most popular genres of anime. It is geared toward tee...
#27 of 97 The Very Best Anime for Kids 78.6k VOTES Since not all anime is intended for children to watch, we've compiled a list of series that are safe for younger viewers. Th...
#13 of 14 14 Brilliant Anime Intended For Intelligent Viewers 19.5k VOTES The best anime are heralded for featuring captivating, unique visuals and complex characters who grow and mat...
#133 of 169 The Best Mystery TV Shows 69k VOTES The best Mystery TV shows make trying to solve a great mystery exciting for both the fans and characters. Nothing beats the ...
#196 of 353 The Best Streaming Netflix TV Shows 5.3M VOTES The best streaming Netflix TV shows include some great television dramas, sci-fi/adventure shows, sitcoms, and reality TV pr...
#38 of 41 The Best Drama Anime on Netflix 4.1k VOTES If you're looking for some good drama anime on Netflix, we've got you covered! This list will tell you what drama anime...
#1 of 43 The Best Detective Anime of All Time 15k VOTES Ready to cast your votes anime fans? We need your input on this list of the best detective anime of all time. This poll feat...
#10 of 13 The Best Adventure Anime on Netflix 1k VOTES Want to go on an adventure? Check out our list of the best adventure anime currently streaming on Netflix. This list in...
#7 of 8 The Best Thriller Anime on Netflix 350 VOTES Looking for some intense thriller anime on Netflix? Since you love living on the edge of your seat, let's tak...
#2 of 10 The Best Mystery Anime on Netflix 403 VOTES If it's mystery anime on Netflix that you seek, look no further. This list ranks every Netflix mystery anime best to worst, ...