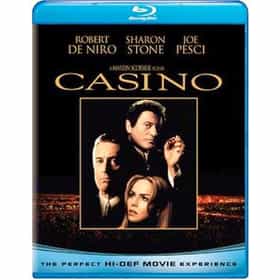 Casino is a 1995 American drama film directed by Martin Scorsese. It is based on the non-fiction book of the same name by Nicholas Pileggi, who also co-wrote the screenplay for the film with Scorsese. The two previously collaborated on the 1990 hit film Goodfellas. The film marks the eighth collaboration between director Scorsese and Robert De Niro, following Mean Streets, Taxi Driver, New York, New York, Raging Bull, The King of Comedy, Goodfellas, and Cape Fear. De Niro stars as Sam "Ace" Rothstein, a Jewish American top gambling handicapper who is called by the Italian Mob to oversee the day-to-day operations at the fictional Tangiers casino in Las Vegas. His ... more on Wikipedia

'Casino’ Is Surprisingly, Gruesomely Accurate 20k views Casino, Martin Scorsese’s 1995 epic underworld story is the spiritual successor to Goodfellas in many ways. Not only did it ...

Casino is ranked on...

Casino is also found on...