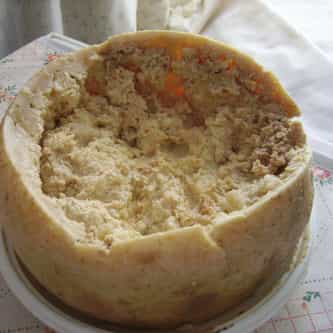 Casu marzu is a traditional Sardinian sheep milk cheese, notable for containing live insect larvae. Although found mostly in the island of Sardinia, the cheese is also found in the nearby Corsica, where it goes by the name of casgiu merzu. Derived from Pecorino, casu marzu goes beyond typical fermentation to a stage most would consider decomposition, brought about by the digestive action of the larvae of the cheese fly Piophila casei. These larvae are deliberately introduced to the cheese, ... more on Wikipedia

Casu marzu IS LISTED ON