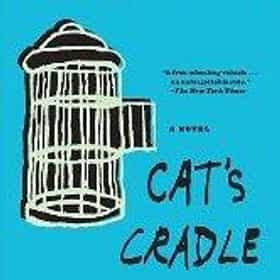 Cat's Cradle is the fourth novel by American writer Kurt Vonnegut, first published in 1963. It explores issues of science, technology, and religion, satirizing the arms race and many other targets along the way. After turning down his original thesis in 1947, the University of Chicago awarded Vonnegut his Master's degree in anthropology in 1971 for Cat's Cradle. The title of the book derives from the string game "cat's cradle." Early in the book, the character Felix Hoenikker was playing cat's cradle when the bomb was dropped, and the game is later referenced by his son, Newton Hoenikker. ... more on Wikipedia

Cat's Cradle is ranked on...

#98 of 172 35+ Books Everybody Lies About Having Read 3M VOTES As you slide comfortably into being an adult, one fact quickly becomes evident: everyone is a big fat liar, especially when ...
#141 of 317 People who voted for Cat's Cradle... also upvote Lord of the Rings Franchise on The Most Rewatchable Movies also upvote Lord of the Rings Franchise on The Best Movies Based on Books The Top Must-Read Books of All Time 493.1k VOTES Need a good read? Take a look at this list of the best must-read books of all time, suitable for every one of all ages,...
#39 of 186 People who voted for Cat's Cradle... also upvote Twilight Saga Franchise on The Most Overrated Movies of All Time also upvote Evil Dead Franchise on The Greatest Horror Films of All Time The Greatest Science Fiction Novels of All Time 480.8k VOTES This list ranks the best science fiction novels ever written, as voted on by sci-fi readers. Anyone can add their picks to t...
#59 of 837 People who voted for Cat's Cradle... People over 50 are 3x more likely to vote for this Books That Changed Your Life 160.8k VOTES The most life changing books, ranked by the wisdom of the crowd of hundreds of people. If you are looking for books that wil...
#75 of 99 NPR's Top 100 Science Fiction & Fantasy Books 28.1k VOTES What are the top 100 science-fiction and fantasy books ever written? This is an argument that will go on until the end of ti...
#11 of 55 The Best Absurdist Fiction Novels 3.5k VOTES List of the best absurdist fiction novels from various time periods with the title and the author's name listed next to imag...
#12 of 25 Great Books They Haven't Made Into Movies Yet (But Should) 834 VOTES Despite Hollywood’s relentless quest to film everything they can think of, there are still plenty of great books that have y...
#21 of 53 The Best Cat Things 2.8k VOTES Do you like cats? How about Kats? Like maybe an Everdeen or a Denning? Or maybe you like Catwoman, but also the old cartoon ...

Cat's Cradle is also found on...