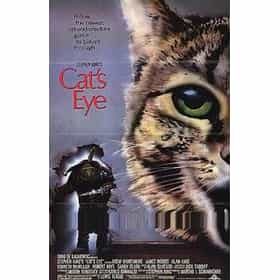 Cat's Eye is a 1985 American anthology horror film directed by Lewis Teague and written by Stephen King. It comprises three stories, "Quitters, Inc.", "The Ledge", and "General". The first two are adaptations of short stories in King's Night Shift collection, and the third is unique to the film. The three stories are connected only by the presence of a traveling cat. The cat plays an incidental role in the first two and is a major character of the third. The film is one of several written for the screen by King. Its cast includes Drew Barrymore, James Woods, Alan King, Robert Hays and Candy Clark. ... more on Wikipedia

'Stephen King's Cat's Eye' Is Low-Key One Of King's Darkest And Most Terrifying Movies 5.9k views If you grew up in that glorious era when the video store reigned supreme, then you remember walking past the box for Stephen...

#290 of 816 The Best Horror Movies Of All Time 1.1M VOTES Horror movies, ranked by adrenaline junkies worldwide. Anyone can vote on this CrowdRanked list, and can even add your own f...
#478 of 581 The Greatest Film Scores of All Time 232.2k VOTES This list contains greatest movie themes and scores ever recorded, chosen by the Ranker community. (NOTE: This list is for f...
#74 of 217 The Best PG-13 Horror Movies 28.3k VOTES You've found the only list you'll ever need when it comes to PG-13 horror movies that are ranked from best to wors...
#99 of 161 The Best Horror Movies of 1980s 108k VOTES This list of the best 80s horror movies is a lengthy one, with good reason. The 1980s were a phenomenal decade for horror fi...
#23 of 52 The Best Drew Barrymore Movies 7.5k VOTES This list of the best Drew Barrymore movies is ranked best to worst and includes movie trailers when available. Drew Barrymo...
#41 of 66 The Best Cat Movies 11.8k VOTES A list of the best cat movies ever. These are movies about cats, or featuring a cat as one of the main characters. Not only ...
#93 of 199 The Best PG-13 Film Adaptation Movies 983 VOTES List of PG-13 film adaptations, ranked from best to worst with movie trailers when available. This list takes the best PG-13...
#8 of 88 The Best Horror Movies of 1985 1.1k VOTES List of the best 1985 horror movies, ranked by how many upvotes they've received by other fans of the genre. All types of sc...