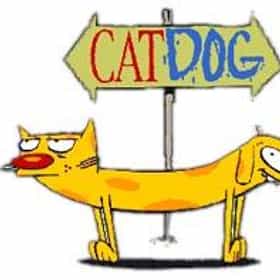 CatDog is an American animated television series created by Peter Hannan for Nickelodeon. The series depicts the life of conjoined brothers, with one half being a cat and the other a dog. Nickelodeon produced the series from Burbank, California. The first episode aired on April 4, 1998, before the show officially premiered in October. The episode "Fetch" was also shown in theaters with The Rugrats Movie. The series ran until June 15, 2005. Toward the end of its run, a made-for-TV film was released, titled CatDog: The Great Parent Mystery. Reruns were played on Nicktoons from 2002 to 2011 and then on TeenNick as part of The '90s Are All That block since March 2013. The series ... more on Wikipedia

CatDog is ranked on...