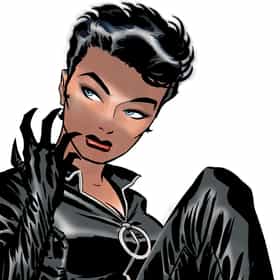 Catwoman is a fictional character who appears in American comic books published by DC Comics and is associated with the Batman franchise. Historically a supervillainess and often an antiheroine, the character was created by Bob Kane and Bill Finger, partially inspired by Kane's cousin, Ruth Steel, as well as actress Jean Harlow. The original and most widely known Catwoman, Selina Kyle, first appears in Batman #1 in which she is known as The Cat. She is usually depicted as an adversary of Batman, known for having a complex love-hate relationship with him. In her first appearance, she was a whip-carrying menace with a taste for high-stake capers. ... more on Wikipedia

Every Movie and TV Catwoman Costume, Ranked 5.2k votes Through the years on screens big and small, Catwoman's usually skintight black costume, no matter how much it covers (which ...
Catwoman In 'Batman Returns' Introduced Unabashed Sensuality To '90s Kids Around The World 7.6k views In 1992, Batman Returns set a precedent for the superhero films that followed in its wake. It’s thematically and visually da...
The Best Actresses Who Played Catwoman 5.4k votes The ultimate "will they or won't they" in comics might be Batman and Catwoman. Whether it's Bruce Wayne and Selina...

Catwoman is ranked on...

Catwoman is also found on...