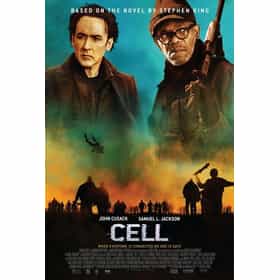 Cell is a 2016 American science fiction horror film based on the 2006 novel of the same name by Stephen King. When an evil electronic signal is broadcast across mobile networks worldwide, cell phone users are instantly and dangerously re-programmed into rabid killers. Heading north through New England to find his estranged wife and son, Clay Riddell (John Cusack) is joined by a group of survivors to battle the horde of murderous phoners as their world descends into apocalyptic madness. ... more on Wikipedia

Cell is ranked on...

#149 of 177 The Very Best Movies of 2016, Ranked 23.7k VOTES Hilarious comedies, thrilling superhero adventures, and engaging dramas comprise the very best films of 2016. The best 2016 ...
#25 of 28 The Best Horror Movies of 2016 3.4k VOTES Kill-crazy clowns, demented hermits, and legendary haunts all appear in the best horror movies of 2016. The scariest 20...
#86 of 89 The Best Sci Fi Thriller Movies, Ranked 8.6k VOTES This list contains information on the best sci-fi thriller movies, ranked from best to worst by user votes. The best sci-fi ...
#13 of 15 The Best Zombie Movies Based on Books 120 VOTES From technology-induced plagues to couples who won't let death get between their love, this list includes information about ...