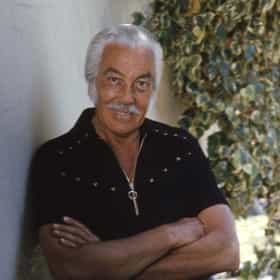 Cesar Julio Romero Jr. (February 15, 1907 – January 1, 1994) was an American actor, singer, dancer and vocal artist. He was active in film, radio, and television for almost 60 years. His wide range of screen roles included Latin lovers, historical figures in costume dramas, characters in light domestic comedies, and the Joker on the Batman television series, which was included in TV Guide's 2013 list of The 60 Nastiest Villains of All Time. ... more on Wikipedia

Cesar Romero is ranked on...

#13 of 54 People who voted for Cesar Romero... also upvote Crowley on The Best TV Villains of All Time also upvote Ash Williams on The Most Hardcore Current TV Characters The Best Actors in Live-Action Comic Book TV Shows 21k VOTES These are the actors that found that sweet spot, that portrayed these modern day gods and goddesses right. They brought our ...
Celebrities Who Were In The Military 7.7M VIEWS The many celebrities who were in the military signed up to make the ultimate sacrifice for their countries. Through the year...
The Locations of All Hollywood Walk of Fame Stars 418.7k VIEWS A list of stars on the Hollywood Walk of Fame, with photos. This list includes all television and movie stars. Acquiring a s...
#5 of 20 All 20+ Actors Who Played Joker, Ranked Best To Worst By Fans 160.9k VOTES Throughout all the various Batman films, animated series, and video games, who do you think are the best Joker actors? ...
300+ Famous People Who Went to Prep School 12.6k VIEWS Many of the most powerful people in the world went to prep school. The children of wealthy parents - often "old money&q...
Famous People Named Cesar 5.4k VIEWS Have you ever realized how many famous people named Cesar there are? We put together this list of celebrities named Cesar to...

Cesar Romero is also found on...