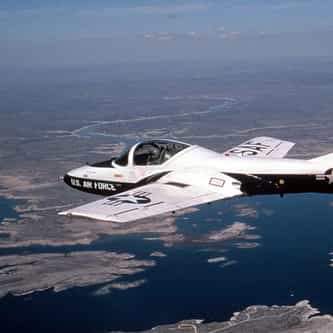 The Cessna T-37 Tweet is a small, economical twin-engined jet trainer-attack type aircraft which flew for decades as a primary trainer for the United States Air Force and in the air forces of several other nations. The A-37 Dragonfly variant served in the light attack role during the Vietnam War and continues to serve in the air forces of several South American nations. The T-37 served as the U.S. Air Force's primary pilot training vehicle for over 52 years after its first flight. After ... more on Wikipedia