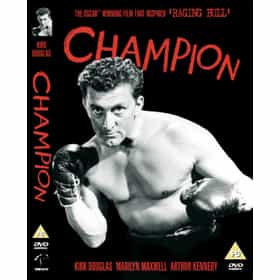 Champion is a 1949 American film noir drama based on a short story by Ring Lardner. Filmed in black-and-white, it recounts the struggles of boxer "Midge" Kelly fighting his own demons while working to achieve success in the boxing ring. The drama was directed by Mark Robson, with cinematography by Franz Planer. The drama features Kirk Douglas, Marilyn Maxwell, and others. The film won an Academy Award for Editing and gained five other nominations as well, including a Best Actor for Douglas. ... more on Wikipedia

Champion is ranked on...

Champion is also found on...