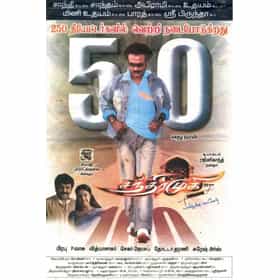 Chandramukhi is a 2005 Indian Tamil comedy-horror film written and directed by P. Vasu, and was produced and distributed by Ramkumar Ganesan of Sivaji Productions. The film features Rajinikanth, Prabhu, Jyothika and Nayantara leading an ensemble cast that includes Vadivelu, Nassar, Sheela, Vijayakumar, Vinaya Prasad, Sonu Sood, Vineeth, Malavika and K. R. Vijaya. The film is a remake of Vasu's Kannada film Apthamitra, which itself is a remake of the Malayalam film Manichitrathazhu. The soundtrack album and background score were composed by Vidyasagar. Cinematography was handled by Sekhar V. Joseph and editing was done by Suresh Urs. Chandramukhi's plot revolves around a woman who ... more on Wikipedia

Chandramukhi is ranked on...

Chandramukhi is also found on...