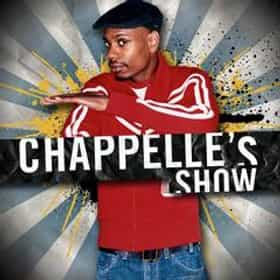 Chappelle's Show is an American sketch comedy television series created by comedians Dave Chappelle and Neal Brennan, with Chappelle hosting the show as well as starring in the majority of its sketches. Chappelle, Brennan and Michele Armour were the show's executive producers. The series premiered on January 22, 2003, on the American cable television network Comedy Central. The show ran for two complete seasons and a third, truncated season. After numerous delays, production of the third season of the show was abruptly ended when Chappelle left the show. Three episodes were compiled from the completed work and these episodes aired from July 9 to July 23, 2006. Re-runs have frequently ... more on Wikipedia

Chappelle's Show is ranked on...