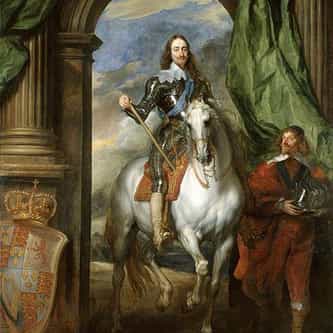 Charles I with M. de St Antoine is an oil painting on canvas by the Flemish painter Anthony van Dyck, depicting Charles I on horseback, accompanied by his riding master, Pierre Antoine Bourdon, Seigneur de St Antoine. Charles I became King of Great Britain and Ireland in 1625 on the death of his father James I, and van Dyck became Charles' Principal Painter in Ordinary in 1632. This portrait is thought to have been painted around 1633, and was the first equestrian portrait of Charles I ... more on Wikipedia