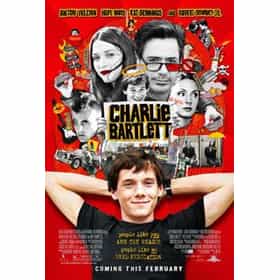 Charlie Bartlett is a 2007 American comedy-drama film directed by Jon Poll. The screenplay by Gustin Nash focuses on a teenager who begins to dispense therapeutic advice and prescription drugs to the student body at his new high school in order to become popular. The film premiered at the Tribeca Film Festival on May 1, 2007, and was shown at the Cannes Film Market, the Maui Film Festival, and the Cambridge Film Festival before going into theatrical release in the United States and Canada on August 3, 2007. ... more on Wikipedia

Charlie Bartlett is ranked on...

Charlie Bartlett is also found on...