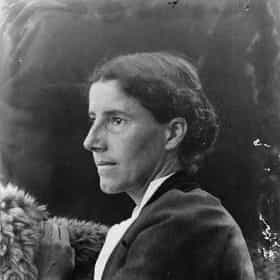 Charlotte Perkins Gilman (; née Perkins; July 3, 1860 – August 17, 1935), also known as Charlotte Perkins Stetson, her first married name, was a prominent American humanist, novelist, writer of short stories, poetry, and nonfiction, and a lecturer for social reform. She was a utopian feminist and served as a role model for future generations of feminists because of her unorthodox concepts and lifestyle. She has been inducted into the National Women's Hall of Fame. Her best remembered work today is her semi-autobiographical short story "The Yellow Wallpaper", which she wrote after a severe bout of postpartum psychosis. Less well known are Gilman's views on race. To ... more on Wikipedia

Charlotte Perkins Gilman is ranked on...

#799 of 1,176 The Best Writers of All Time 312.5k VOTES The pen is truly mightier than the sword, and if you’re a book enthusiast you know that to be true. Some of history’s most i...
#83 of 237 The All-Time Greatest Horror Writers 96.9k VOTES The best horror novelists include some great authors who manage to weave fantastical tales of horror that leave readers scar...
#47 of 62 The Best Ever Female Sci-Fi Authors 2.2k VOTES The best female sci-fi authors are the women who, despite the odds, found success in the science fiction writing genre. Typi...
Famous People Named Charlotte 15.8k VIEWS List of famous people named Charlotte, along with photos. How many celebrities named Charlotte can you think of? The famous ...
List of Ecofeminists 7.9k VIEWS This is a list of ecofeminists with lots of photos. What is the definition of ecofeminism? It's a movement that joins femini...