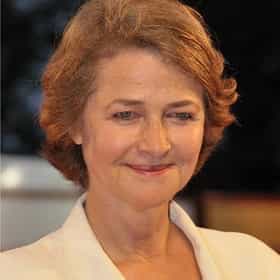 Tessa Charlotte Rampling (born 5 February 1946) is an English actress, model and singer, known for her work in European arthouse films in English, French, and Italian. An icon of the Swinging Sixties, she began her career as a model and later became a fashion icon and muse.She was cast in the role of Meredith in the 1966 film Georgy Girl, which starred Lynn Redgrave. She soon began making French and Italian arthouse films, most notably during this time in Luchino Visconti's The Damned (1969) and Liliana Cavani's The Night Porter (1974). She went on to star in Zardoz (1974), Farewell, My Lovely (1975), Woody Allen's Stardust Memories (1980), opposite Paul Newman in The Verdict (1982), ... more on Wikipedia

Charlotte Rampling is ranked on...

#291 of 938 The Best Actresses in Film History 1.1M VOTES The best actresses ever are ranked here in this list of the best actresses in film history. These are the greatest actresses...
#944 of 2,003 The Greatest Actors & Actresses in Entertainment History 1.7M VOTES The best actors and actresses of all time, male and female, ranked by film fans worldwide. This list of greatest actors and ...
#34 of 57 People who voted for Charlotte Rampling... also upvote James Bond Franchise on Every James Bond Movie, Ranked Best to Worst also upvote James Bond Franchise on The Best Spy Movies The Best English Actresses Working Today 13k VOTES There have been plenty of great English actresses throughout film history, but which female ones are the greatest working ri...
#151 of 331 People who voted for Charlotte Rampling... also upvote Frances McDormand on The Best Actresses in Film History The Best Actresses Working Today 387.3k VOTES List of the best actresses working today, ranked. This list includes many of the greatest actresses in film history, but mor...
#34 of 93 99 Best Vintage Pin-Ups 458.3k VOTES It's hard to imagine now, in the age of the Internet, that once upon a time, in the '40s, '50s, '60s and '70s, pin-up models...
#34 of 74 The Best English Actresses of All Time 20.1k VOTES When it comes to the best English actresses of all time, there will likely be a heated debate. Helen Mirren, Judi Dench, and...
#24 of 186 People who voted for Charlotte Rampling... also upvote Star Trek Franchise on The Greatest Sci-Fi Movies of All Time The Best Living English Actresses 41.6k VOTES Hailing from England, these women in film are acting circles around some of their male counterparts. These actresses from En...
#104 of 181 The Greatest Actresses Who Have Never Won an Oscar (for Acting) 64.3k VOTES There are many actresses who haven't won an Oscar. For 95 percent of the acting population, there is probably a good reason ...
#69 of 100 The 100+ Greatest Film Actresses Of The 2010s 6.1k VOTES The 2010s provided some of the best films of all time. That wouldn’t have been possible if it wasn't for the amazing work of...
#50 of 52 Celebrities You Don't Want to See Get Older 8.7k VOTES Everyone has celebrities that they love. Those famous men and women whom you've connected to with one or two particular film...
Lifetime Movies Actors and Actresses 14.7k VIEWS Lifetime Movies employs a wide range of actors -most of which you will recognize from more than just TV movies. Lifetime act...
Famous People Who Have Been Through Depression 114.3k VIEWS This is a list of famous people with depression, or who have suffered from depression at some point in their lives. Who are ...
Famous People Named Charlotte 15.2k VIEWS List of famous people named Charlotte, along with photos. How many celebrities named Charlotte can you think of? The famous ...

Charlotte Rampling is also found on...