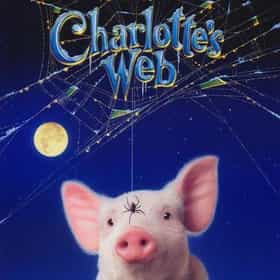 Charlotte's Web is a 2006 American live-action/computer-animated feature film based on the popular book of the same name by E. B. White. It is directed by Gary Winick and produced by Paramount Pictures, Walden Media, The K Entertainment Company, and Nickelodeon Movies. The screenplay is by Susannah Grant and Karey Kirkpatrick, based on White's book. It is the second film adaptation of White's book, preceded by a 1973 cel-animated version produced by Hanna-Barbera for Paramount Pictures. ... more on Wikipedia

Every Song in Charlotte's Web, Ranked by Singability 82 votes In 1973, the much beloved E.B. White children's novel came to life in the now classic animated adaptation Charlotte's Web. A...

Charlotte's Web is ranked on...

Charlotte's Web is also found on...