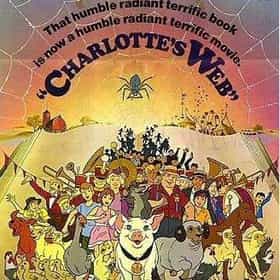 Charlotte's Web is a 1973 American animated musical film produced by Hanna-Barbera Productions and Sagittarius Productions and based upon the 1952 children's book of the same name by E. B. White. The film, like the book, is about a pig named Wilbur who befriends an intelligent spider named Charlotte who saves him and was distributed to theatres by Paramount Pictures on March 1, 1973. It is the first of only three Hanna-Barbera features not based upon one of their famous television cartoons — Heidi's Song and Once Upon a Forest being the other two — and was a moderate critical and commercial success. ... more on Wikipedia

Charlotte's Web is ranked on...

Charlotte's Web is also found on...