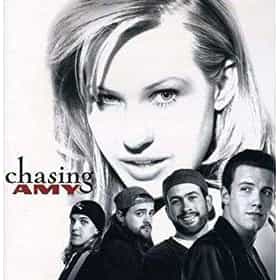 Chasing Amy is a 1997 American romantic comedy film written and directed by Kevin Smith. The central tension revolves around sexuality, sexual history, and evolving friendships. It is the third film in Smith's View Askewniverse series. The film was originally inspired by a brief scene from an early movie by a friend of Smith's. In Guinevere Turner's Go Fish, one of the lesbian characters imagines her friends passing judgment on her for "selling out" by sleeping with a man. Kevin Smith was dating star Joey Lauren Adams at the time he was writing the script, which was also partly inspired by her. The film won two awards at the 1998 Independent Spirit Awards. ... more on Wikipedia

Chasing Amy is ranked on...

Chasing Amy is also found on...