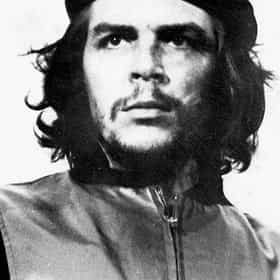 Ernesto "Che" Guevara, commonly known as el Che or simply Che, was an Argentine Marxist revolutionary, physician, author, guerrilla leader, diplomat, and military theorist. A major figure of the Cuban Revolution, his stylized visage has become a ubiquitous countercultural symbol of rebellion and global insignia in popular culture. As a young medical student, Guevara traveled throughout South America and was radicalized by the poverty, hunger, and disease he witnessed. His burgeoning desire to help overturn what he saw as the capitalist exploitation of Latin America by the United States prompted his involvement in Guatemala's social reforms under President Jacobo ... more on Wikipedia

Che Guevara is ranked on...

#222 of 2,830 People who voted for Che Guevara... People outside of the US are 2x more likely to vote for this The Most Influential People of All Time 2.4M VOTES This is a list of the most influential people of all of human history. This means that the individuals on this list have had...
#20 of 66 The Most Influential People of the Cold War 11.7k VOTES The Cold War was a period of confrontation between the two superpowers of the world, the United States and the Soviet Union....
#697 of 1,472 The Greatest Minds of All Time 739.9k VOTES List of the Greatest Minds of All Time, throughout history. This list represents the most influential thinkers across variou...
42 Famous ENFPs 307.7k VIEWS Many famous actors, comedians and musicians are believed to be ENFPs (Extraverted Intuitive Feeling Perceiving). ENFPs are k...
Famous People Named Ernesto 880 VIEWS Who knew there were so many famous people named Ernesto in the world? Our list of celebrities named Ernesto includes pictu...
List of North & South American Assassinations 20.2k VIEWS Curious about what South American Assassinations have taken place? This is a detailed list of assassination in south America...

Che Guevara is also found on...