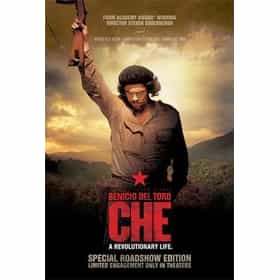 Che is a two-part 2008 biographical film directed by Steven Soderbergh. Part One is entitled The Argentine and focuses on the Cuban Revolution from the landing of Fidel Castro (Demián Bichir), Che Guevara (Benicio del Toro), and other revolutionaries in Cuba to their successful toppling of Fulgencio Batista's dictatorship two years later. Part Two is titled Guerrilla and focuses on Guevara's attempt to bring revolution to Bolivia and his demise. ... more on Wikipedia