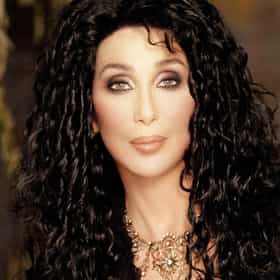 Cher (born Cherilyn Sarkisian; May 20, 1946) is an American singer, actress and television host. Commonly referred to by the media as the Goddess of Pop, she has been described as embodying female autonomy in a male-dominated industry. She is known for her distinctive contralto singing voice and for having worked in numerous areas of entertainment, as well as adopting a variety of styles and appearances during her six-decade-long career. Cher gained popularity in 1965 as one-half of the folk rock husband-wife duo Sonny & Cher after their song "I Got You Babe" reached number one on the American and British charts. By the end of 1967, they had sold 40 million records ... more on Wikipedia

The Most Insane Things Cher Has Ever Tweeted 1k votes Cher's Twitter account is chock-full of memorable and quintessentially Cher tweets - from her prolific emoji use, her almost...
The Best Cher Albums of All Time 3.6k votes Cher is one the biggest pop artists of all time. List of the best Cher albums, including pictures of the album covers when a...
The Best Cher Movies 4.4k votes List of the best Cher movies, ranked best to worst with movie trailers when available. Cher is best known for recording hit ...
The Best Cher Songs 5.5k votes List of Cher songs, ranked from best to worst by the Ranker community. All of Cher's singles are included here, but real fan...

Cher is ranked on...

Cher is also found on...