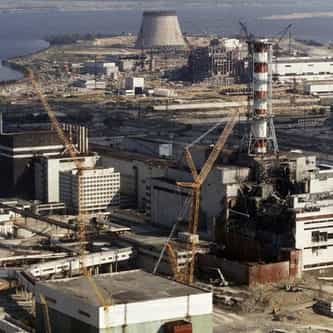 The Chernobyl disaster was a catastrophic nuclear accident that occurred on 26 April 1986 at the Chernobyl Nuclear Power Plant in Ukraine, which was under the direct jurisdiction of the central authorities of the Soviet Union. An explosion and fire released large quantities of radioactive particles into the atmosphere, which spread over much of the western USSR and Europe. The Chernobyl disaster was the worst nuclear power plant accident in history in terms of cost and casualties. It is ... more on Wikipedia

531.7k readers Chernobyl’s Most Dangerous Radioactive Material Is Still Slowly Burning A Hole Through The Earth

44k readers What Locals Think About The Chernobyl Disaster

17.8k votes The Creepiest Photos From The Chernobyl Disaster And Its Aftermath

627.2k readers These Conspiracy Theories Suggest Something Even More Sinister Happened At Chernobyl

82.4k readers The True Story Of The Three Chernobyl Workers Who Waded Into Radioactive Water

8.1k votes The Creepiest Photos Of Dolls At Chernobyl

17.8k readers Everything That Had To Go Wrong For Chernobyl To Happen

5.9k votes The Most Haunting Photos Of Chernobyl Now

7.9k votes 'Chernobyl' Actors Vs. The Real People They Portrayed