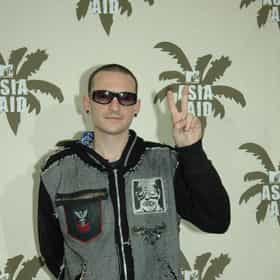 Chester Charles Bennington (March 20, 1976 – July 20, 2017) was an American singer, songwriter, musician, and actor. He was best known as the lead vocalist for Linkin Park. He was also lead vocalist for the bands Dead by Sunrise, Grey Daze, and Stone Temple Pilots. He also appeared in cameo roles in several films, including Crank, Crank: High Voltage and Saw 3D. Bennington is widely regarded as one of the top rock musicians of the 2000s.Bennington first gained prominence as a vocalist following the release of Linkin Park's debut album Hybrid Theory (2000) which was a worldwide commercial success. The album was certified Diamond by the RIAA in 2005, making it the best-selling debut ... more on Wikipedia

Chester Bennington is ranked on...

#295 of 453 The Greatest Singers of the Past 30 Years 211.6k VOTES One of the most debated topics in music is who are the greatest singers of the past 30 years. Whether you're a huge Whitney ...
#475 of 926 People We Wish Were Still Alive 3.3M VOTES RIP to our world's greatest achievers, those who changed the way we live and the ways we thought. This list of people we wis...
#221 of 1,059 The Best Singers of All Time 2.2M VOTES Who are the best singers of all time? That's a tough question to ask. This list includes many of the greatest, most famous v...
#133 of 298 The (Male) Singer You Most Wish You Could Sound Like 137.3k VOTES What male singer's voice would you most like to have? This is a different question than "who are the best vocalists eve...
#90 of 202 Rock Stars Whose Deaths Were The Most Untimely 264.1k VOTES Dead rock stars, ranked in order of how much potential great music was lost to this world by their untimely passing. Th...
#33 of 519 Which Artist Would You Bring Back From The Dead To Write One More Song? 122.5k VOTES Many of the world's greatest musicians remain highly respected even in death. The world often mourns the loss of t...
#41 of 75 Rock Stars Who You Wish You Could Sound Like 18k VOTES Pretend that you could magically have the voice of any famous rock singer. Who would it be? Just for a minute, imagine it&nb...
#13 of 16 Former Boyfriends And Girlfriends Of Celebrities Describe What They Were Like Before They Got Famous 27k VOTES It's always fascinating to discover what celebrities were like before they were famous. Were they shy and sweet, or wer...
#4 of 100 The Best Musical Artists From Arizona 1.5k VOTES Here are the best artists and bands from Arizona. Known for its heat, Arizona is also red hot by all of the bands ...
Ages of Rock Stars 28.5k VIEWS Do you know the ages of rock stars you listen to? Well, here you have them: the ages of top rock stars listed by fame and no...
Famous Pisces Male Celebrities 21.8k VIEWS People born under the star sign Pisces are known for their depth of feeling and sensitivity. Their emotional creativity make...
Celebrities Who Survived Sexual Abuse 197.2k VIEWS This list contains information about celebrities who were sexually abused as children. According to RAINN, the Rape, Abuse a...

Chester Bennington is also found on...