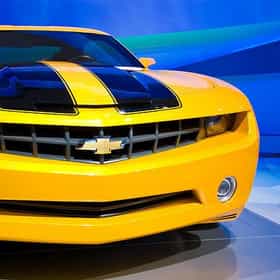 The Chevrolet Camaro is an automobile manufactured by General Motors under the Chevrolet brand, classified as a pony car and some versions also as a muscle car. It went on sale on September 29, 1966, for the 1967 model year and was designed as a competing model to the Ford Mustang. The car shared its platform and major components with the Pontiac Firebird, also introduced for 1967. Four distinct generations of the Camaro were developed before production ended in 2002. The nameplate was revived on a concept car that evolved into the fifth-generation Camaro; production started on March 16, 2009. ... more on Wikipedia

Chevrolet Camaro is ranked on...

#27 of 256 The Ultimate Dream Garage 121.2k VOTES As car lovers, we all have a list of cars we'd love to someday own. Our "dream garage". These automobiles are not ...
#9 of 75 The Top Cars For Teenagers 32.8k VOTES A list of top cars for teenagers, based in part on results provided by US News, but also ranked by you, the public. What are...
#4 of 78 People who voted for Chevrolet Camaro... also upvote Twilight Saga Franchise on The Most Overrated Movies of All Time also upvote Franklin D. Roosevelt on The Greatest U.S. Presidents of All Time The Best 1960s Cars 87.8k VOTES 1960s cars were some of the most beautiful cars ever to cruise the asphalt jungles of cities and country alike, and this lis...
#28 of 54 The Longest Lasting Cars That Go the Distance 5.1k VOTES While there are many factors to consider when purchasing a vehicle, there is one element that everyone looks for: reliabilit...
#4 of 65 People who voted for Chevrolet Camaro... also upvote Harry Potter Franchise on The Most Rewatchable Movies also upvote X-Men Franchise on The Greatest Comic Book Movies of All Time The Best Inexpensive Cars You'd Love to Own 34.9k VOTES A list of the best inexpensive cars you'd actually love to own. Sure, it's simple to go out and find a bottom-end, new car f...
#10 of 44 The Best Muscle Cars 29.1k VOTES A list of the best muscle cars ranked by you. These are true muscle cars, not pony cars, and none of those new plastic toy...
#7 of 39 The Best Car Values 7.1k VOTES This list of the best cars for the money is ranked by auto aficionados worldwide. Anyone can vote on this list of great car ...
#13 of 85 The Best Cars of 2019 6.9k VOTES Which of these are the best 2019 cars so far? You won't find SUVs, trucks, or vans on this list but you will find every...
#3 of 6 The Best Pony Cars 983 VOTES A list of the best pony cars ranked by you. These are true pony cars, not muscle cars, and none of those new plastic toys cl...
#8 of 16 The Coolest Cars You Can Still Buy with a Manual Transmission 839 VOTES They say the manual transmission is dying, and there may be some truth to that. But not without reason. The fact is, modern ...
The Best Car Model Redesigns in History 11k VIEWS Up until recently, complete car redesigns were usually last-ditch efforts to salvage failing car models. Those attempts had ...
#10 of 33 The Best 2020 Car Models On The Market 164 VOTES What is the best car of 2020? You get to help decide with your votes. A new decade is right around the corner, and one of th...

Chevrolet Camaro is also found on...