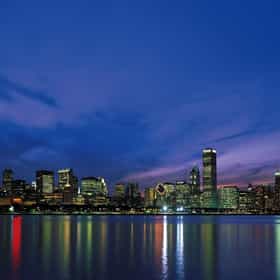 Chicago is the third most populous city in the United States, after New York City and Los Angeles. With 2.7 million residents, it is the most populous city in both the U.S. state of Illinois and the Midwestern United States. Its metropolitan area, sometimes called Chicagoland, is home to 9.9 million people and is the third-largest in the United States. Chicago is the seat of Cook County. Chicago was incorporated as a city in 1837, near a portage between the Great Lakes and the Mississippi River watershed, and experienced rapid growth in the mid-nineteenth century. Today, the city is an international hub for finance, commerce, industry, technology, telecommunications, and ... more on Wikipedia

Philadelphia
Creepiest Ghost Stories From Chicago 8.2k votes Chicago is a city with its own fair share of tragedy and pain. Natural disasters, horrible accidents, and bloody mass slayin...
The Best Songs About Chicago 775 votes If you're from the Windy City, you'll definitely want to check out this list of the best songs about Chicago. Chicago often ...
The Best Chicago Albums of All Time 2.5k votes Veteran rock band Chicago is one of the best rock bands and best jazz rock bands of all time. List of the best Chicago album...
The Best TV Shows Set in Chicago 460 votes Chicago, Illinois may be called "Second City" but when it comes to television dramas it is second to none. It's no...
Every Song in Chicago, Ranked by Singability 1.4k votes Calling all Roxie's and Velma's, it's time to rank the best songs from Chicago. Adapted from the 1926 play by Maurine Dallas...
The 25 Tallest Buildings in Chicago 18k views Chicago is a beautiful city, with many extremely tall buildings. This list features the 25 tallest buildings in Chicago, Ill...
The Best Day Trips from Chicago 658 votes List of the best day trips from Chicago. You’ve seen the Willis Tower (formerly the Sears Tower), eaten a burger at P.J. Cla...
The Best Chicago Movies 1.4k votes McCormick Place, the Lincoln Park Zoo, Western Avenue, the Harold Washington Library, the Oceanarium, the Field Museum – the...
All The Celebrities Who Call Chicago Home 446k views Several famous actors, musicians, and comedians have lived in Chicago, Illinois. Many celebrities were born in Chicago and o...
The Best Chicago Beers, Ranked 217 votes While Chicago is famous for its vast array of food options, the city is also home to some seriously impressive craft beers. ...

Chicago is ranked on...

Chicago is also found on...