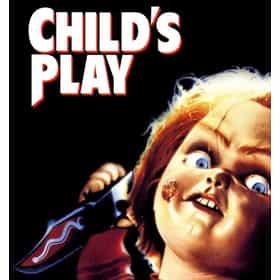 Child's Play is a 1988 American horror film directed by Tom Holland, written by Tom Holland, Don Mancini, and John Lafia, and starring Catherine Hicks, Chris Sarandon, Alex Vincent, and Brad Dourif. The official taglines of the film are "You'll wish it was only make-believe" and "Something's moved in with the Barclay family, and so has terror." The film was released on November 9, 1988 in 1,119 theatres and met with moderate success. It has since developed a cult following among fans of the horror genre. The film is the first in the Child's Play film series, and is the first movie to feature the killer doll Chucky. It was the only film in the series released by ... more on Wikipedia

Child's Play is ranked on...

Child's Play is also found on...