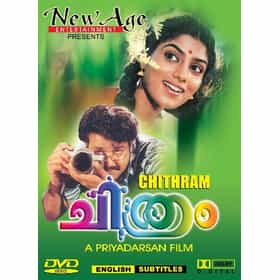 Chithram is a 1988 Malayalam screwball comedy film written and directed by Priyadarshan. The film was produced by P. K. R. Pillai under the banner Shirdi Sai Creations. The film stars Mohanlal, Ranjini, Nedumudi Venu, Poornam Vishwanathan, Sreenivasan, Soman, Sukumari, Lizy, and Maniyanpilla Raju while Thikkurissy appears in a guest role. The musical songs were composed by Kannur Rajan and the background score was by Johnson. The film was a phenomenal success at the Kerala box-office when released during 1988 Christmas weekend. It broke all existing records in Malayalam cinema at the time. It had a theatrical run of more than 366 days in some centres and is said to be one of the ... more on Wikipedia

Chithram is also found on...