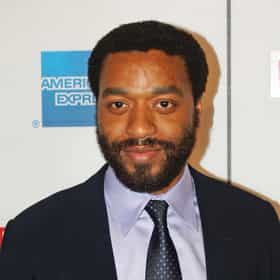 Chiwetel Umeadi Ejiofor ( CHOO-ə-tel EJ-ee-oh-for; born July 7, 1977) is a British actor.After enrolling at the National Youth Theatre in 1995 and attending the London Academy of Music and Dramatic Art, at age 19 and three months into his course, Ejiofor was cast by Steven Spielberg to play a supporting role in the film Amistad (1997) as James Covey.Ejiofor portrayed the characters Okwe in Dirty Pretty Things (2002), Lola in Kinky Boots (2005), The Operative in Serenity (2005), Solomon Northup in 12 Years a Slave (2013), Dr. Vincent Kapoor in The Martian (2015), Karl Mordo in Doctor Strange (2016), Dr. Watson in Sherlock Gnomes (2018) and Trywell Kamkwamba in The Boy Who Harnessed the ... more on Wikipedia

Chiwetel Ejiofor is ranked on...

#374 of 1,151 The Best Actors in Film History 2.2M VOTES The best actors ever are ranked here in this list of the best actors in film history. These are the greatest actors ever to ...
#231 of 389 The Most Overrated Actors Of All Time 1.1M VOTES This list of the most overrated actors of all time, has been ranked by critics and fans from all over the world. Actors are ...
#129 of 282 People who voted for Chiwetel Ejiofor... also upvote Lord of the Rings Franchise on The Best Movies of All Time also upvote Bourne Franchise on The Best Movies of All Time The Best (Male) Actors Working Today 1.5M VOTES The best actors working today include Hollywood legends, Academy Award winners and many of the top up and coming actors in t...
#150 of 333 The Greatest Actors Who Have Never Won an Oscar (for Acting) 452.3k VOTES There are many actors who haven't won an Oscar. For 95 percent of the acting population, there is probably a good reason the...
#45 of 56 The Best English Actors Working Today 33.6k VOTES There have been plenty of great English actors throughout film history, but which male English actors working today are the ...
#138 of 273 The Greatest British Actors of All Time 282.5k VOTES This list of the greatest British actors of all time has been ranked by fans of the films and TV shows in which these men ha...
#74 of 115 The Greatest Film Actors Of The 2010s 29.4k VOTES Who were the best actors of the 2010s? This list will highlight 2010s actors, from Oscar regulars like Bradley Cooper and Ch...
#84 of 115 The Best English Actors of All Time 78.6k VOTES Some of the best actors of all time hail from England, and whether you love these English men for their acting talents or ju...
#25 of 56 The Greatest Non-White Actors in Hollywood 3.6k VOTES With audiences pushing Hollywood towards increased diversity both on- and off-screen, now is the perfect time to celebrate t...
#39 of 89 Celebrities Who Should Be A-Listers 120.1k VOTES If pop culture has room enough for multiple A-list Jennifers and Chrises, it has enough time to make some space for cer...
#39 of 66 The Best Living English Actors 28.9k VOTES You'd listen to Michael Caine talk all day, right? And surely you'd watch Ian McKellan in just about any movie Hollywood d...
#14 of 85 The Best African American Actors in Film 30.9k VOTES From any era and genre, these are the greatest African American actors in film history, ranked by the community to determine...
#9 of 30 Who Should Be in a Miles Morales Spider-Man Film? 3k VOTES With The Amazing Spider-Man 2 not being the be all end all Marvel Studios film success Sony needed it to be, the...
#13 of 22 Famous People You Never Realized Are British, Ranked By How Surprised You Were When You Found Out 8.2k VOTES Actors and even some musicians from across the pond seem to do exceptionally well in American pop culture, movies, and ...
#5 of 35 Celebrities Whose Names Are Hardest to Spell 9.2k VOTES Some big time Hollywood celebrities have one tiny thing wrong with them: it's very hard to spell their names. These celebrit...
#47 of 50 50 Celebrities Who Have Sung In Movies 3.6k VOTES Nowadays, becoming a star requires the total package. Acting, dancing, singing: if you want to see your name up in lights, y...
#22 of 27 The Best Actor Performances of 2013 2.1k VOTES List of the best actors performances of 2013, as ranked by movie lovers and film critics. Every year hundreds of movies are ...
Famous Boarding School Alumni 38.7k VIEWS List of famous people who went to boarding school, loosely ranked by fame and popularity. For hundreds of years, rich and po...
300+ Famous People Who Went to Prep School 12.5k VIEWS Many of the most powerful people in the world went to prep school. The children of wealthy parents - often "old money&q...
Foreign Actors Who Totally Bamboozled Us With Perfect American Accents 26k VIEWS Is the American accent hard to perfect? For most of the people on our list of actors doing American accents, the answer is n...
Lupita Nyong'o Loves and Hookups 36.8k VIEWS Who is Lupita Nyong'o dating? Many famous men have dated Lupita Nyong'o, and this list will give you more details about thes...
How to Pronounce Tricky Celebrity Names 16.2k VIEWS Not every celebrity name is as straight-forward as "Tom Hanks" and you won't find him anywhere near this list, whi...
Straight Actors Who Have Played Gay Characters 119.1k VIEWS List of gay characters played by straight actors, loosely ranked by fame and popularity. One of the great things about being...
20 Actors Who Have Played Othello 53.7k VIEWS Othello is one of William Shakespeare's most notable tragedies. It addresses themes of racism, love and betrayal that are as...
'The Lion King' Voice Actors Vs. The Characters They're Voicing 793 VIEWS The Lion King has come full circle in 2019 and was granted new life as a live-action film complete with a score composed by ...
Male Celebrities Who Are 5’10" 24.6k VIEWS This list contains examples of male celebs who are 5'10" loosely ranked by fame and popularity. Standing above the aver...

Chiwetel Ejiofor is also found on...