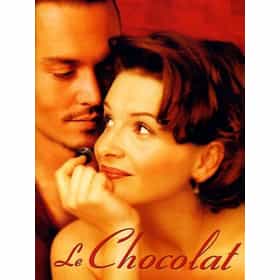 Chocolat is a 2000 American-British romantic drama film based on the novel of the same name by Joanne Harris, and was directed by Lasse Hallström. Adapted by screenwriter Robert Nelson Jacobs, Chocolat tells the story of a young mother, played by Juliette Binoche, who arrives at the fictional, repressed French village of Lansquenet-sous-Tannes with her six-year-old daughter and opens La Chocolaterie Maya, a small chocolaterie. Her chocolate quickly begins to change the lives of the townspeople. The film was shot in the village of Flavigny-sur-Ozerain in Burgundy, France, and on the Rue De L'ancienne Poste in Beynac-et-Cazenac on the Dordogne River in Dordogne, France. The river ... more on Wikipedia

Chocolat is ranked on...

Chocolat is also found on...