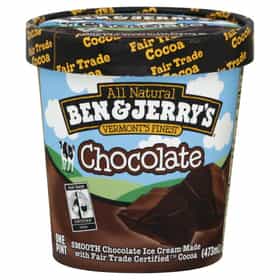 Chocolate is a typically sweet, usually brown, food preparation of Theobroma cacao seeds, roasted and ground, often flavored, as with vanilla. It is made in the form of a liquid, paste or in a block or used as a flavoring ingredient in other sweet foods. Cacao has been cultivated by many cultures for at least three millennia in Mesoamerica. The earliest evidence of use traces to the Mokaya, with evidence of chocolate beverages dating back to 1900 BC. In fact, the majority of Mesoamerican people made chocolate beverages, including the Maya and Aztecs, who made it into a beverage known as xocolātl, a Nahuatl word meaning "bitter water". The seeds of the cacao tree have an ... more on Wikipedia

Chocolate is ranked on...

#25 of 156 If You Could Only Eat One Food for the Rest of Your Life... 176.3k VOTES It’s a question asked by kids at sleepovers and by bored office workers around the world. If you could only eat one food for...
#15 of 103 The Greatest Simple Pleasures in Life 73.9k VOTES The simpler, little things in life that make you feel content and happy are easier to come by and oftentimes more meaningful...
#343 of 341 Popular Things You're Just Not Interested In 190.9k VOTES Face it, when it comes to solid taste, majority doesn't always rule. It's time to take a good long look at popular thin...
#14 of 18 The Most Historically Important Foodstuffs 1.9k VOTES Human history is built on food. Just about any social occasion or backroom deal, no matter how small, has had some kind of f...
#20 of 50 The Most Delicious Pies 65.2k VOTES What's better than walking into a restaurant to find a bright bakery case filled with dozens of kinds of pies? Nothing. The ...
#26 of 88 The Best Smells in the World 109.3k VOTES Scientists have found that smell is the sense that’s most tied into memory, and this makes one contemplate the possibility t...
#3 of 24 The Best Food Items to Turn Into Marijuana Edibles 2.7k VOTES So many things are better with (canna)butter: cookies, candies, cakes, oh my! If you're considering making a little cannabud...
#1 of 27 The Very Best Types of Candy, Ranked 3.6k VOTES Whether they're sugary sweet, a little sour, or drizzled in chocolate, all different kinds of candy are irresistible. T...
#26 of 30 The Very Best Flavors Soda Can Be 5.1k VOTES This list contains information about the best soft drink flavors, ranked from best to worst by user votes. The best soft dri...
#21 of 38 The Best Foods to Buy Organic 1.4k VOTES List of the best foods to buy organic, as ranked by organic food lovers. Organic foods are those grown without the use of ch...
#5 of 32 The Best Foods to Eat on a Date 8.5k VOTES Going on a first date is a tricky situation. After you've decided what to wear, what to say, and where to go, you have to fi...
#9 of 46 Foods You'd Eat Everyday If You Didn't Gain Weight 6.6k VOTES Everyone likes eating, but it seems like everything delicious is loaded with calories, fat, and sugar. Let's play a game and...
#9 of 48 The Best Breyers Ice Cream Flavors 18.2k VOTES A list of all the Breyers ice cream flavors to be voted on to determine the best flavor of ice cream from the company. The...
#12 of 24 The Best Toaster Strudel Flavors of All Time 9.9k VOTES I don't think that Gretchen Weiner's father, the inventor of Toaster Strudel, would be too happy to hear that you don't know...
#3 of 41 The Best Gelato Flavors 3.8k VOTES Your mouth has been watering just thinking about it; you approach the ice cream café, anxiously awaiting the creamy, ...
#16 of 28 The Best Food Pairings For Malbec, Ranked 182 VOTES Wondering what foods to eat with Malbec? Here is a list of the best food and wine pairings for Malbec, which includes cheese...
20 Foods That Will Put You In A Better Mood 5.9k VIEWS We all know that we are supposed to eat healthy. But many of us don't give our foods much consideration beyond their taste a...