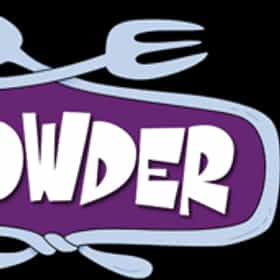 Chowder is an American animated television series created by C.H. Greenblatt for Cartoon Network. The series follows an aspiring young chef named Chowder and his day-to-day adventures as an apprentice in Mung Daal's catering company. Although he means well, Chowder often finds himself in predicaments due to his perpetual appetite and his nature as a scatterbrain. He is also pestered by Panini, the apprentice of Mung's rival Endive, who wants Chowder to be her "boyfriend", which he abhors. The series is animated with both traditional animation as well as short stop motion puppet sequences that are inter-cut into the episodes, and that run over the end credits. Chowder ... more on Wikipedia

Chowder is ranked on...

#193 of 477 The Greatest Animated Series Ever Made 645k VOTES The top animated series of all time include some of the best TV shows ever to flicker in your living room (or on your comput...
#246 of 385 People who voted for Chowder... Men are 2x more likely to vote for this People under 30 are 2x more likely to vote for this The Best Kids Cartoons of All Time 1.2M VOTES This list contains information about the best kids cartoons, ranked by your votes. Over the years, there have been tons of g...
#113 of 236 The Greatest Cartoon Theme Songs of All Time 164.1k VOTES For entire generations of kids, some of their most fond memories are of watching Saturday morning cartoons. The animated sho...
#4 of 18 The Best Cartoon Network Shows of the 2000s 2.2k VOTES Cartoon Network played an important part in many people's childhoods. It is home to some of the best cartoons of all time, a...
#19 of 134 People who voted for Chowder... Women are 2x more likely to vote for this also upvote Star Wars Franchise on The Greatest Sci-Fi Movies of All Time The Best Cartoon Network TV Shows 496.6k VOTES Cartoon Network shows have been bringing some of the funniest and most action-packed cartoons that both kids and adults can ...
#230 of 476 The Best Television Shows of the 2000s 148.4k VOTES Some great TV shows came out of the 2000s, while some have even lived on. Here's a list of the best shows that aired from 20...