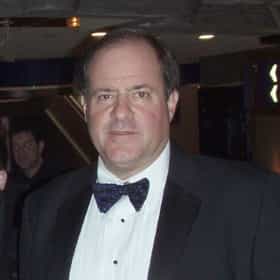 Christopher James Berman (born May 10, 1955), nicknamed Boomer, is an American sportscaster. He has been an anchor for SportsCenter on ESPN since 1979, joining a month after its initial launch, and hosted the network's Sunday NFL Countdown program from 1985 to 2016. He has also anchored Monday Night Countdown, U.S. Open golf, the Stanley Cup Finals, and other programming on ESPN and ABC Sports. Berman calls play-by-play of select Major League Baseball games for ESPN, which included the Home Run Derby until 2016. A six-time honoree of the National Sports Media Association's "National Sportscaster of the Year" award, Berman was instrumental in establishing ESPN's lasting ... more on Wikipedia

Chris Berman is ranked on...

#5 of 46 The Best SportsCenter Anchors of All Time 9.1k VOTES With the recent passing of Stuart Scott, it got me thinking of how the anchors of SportsCenter were such a big part of my li...
#12 of 90 People who voted for Chris Berman... also upvote Star Trek Franchise on The Best Space Movies also upvote Star Trek Franchise on The Greatest Sci-Fi Movies of All Time The Best Sports Personalities on ESPN 26.6k VOTES Unlike our list of the Worst ESPN Personalities, these personalities and pundits give the finest viewpoints ESPN has to offe...
#44 of 100 Who Is The Most Famous Chris In The World? 1.3k VOTES How many celebrities named Chris can you think of? The famous Chris's below have many different professions, as this li...

Chris Berman is also found on...