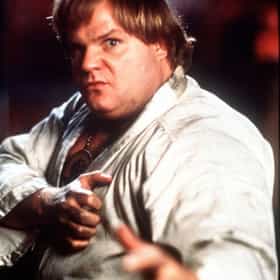 Christopher Crosby Farley (February 15, 1964 – December 18, 1997) was an American actor and comedian. Farley was known for his loud, energetic comedic style, and was a member of Chicago's Second City Theatre and later a cast member of the NBC sketch comedy show Saturday Night Live between 1990 and 1995. He then went on to pursue a film career, starring in films such as Coneheads, Tommy Boy, Black Sheep and Beverly Hills Ninja. Farley died of a drug overdose at the age of 33. ... more on Wikipedia

John Candy
Hilarious And Wild Chris Farley Stories That Will Make You Laugh And Maybe Cry 91.7k views Chris Farley was a uniquely talented physical comedian – in fact, some say he's the greatest of his generation. Even though ...
‘I Am Chris Farley’ Is A Touching But Tragic Documentary About The Doomed Comedian 13.8k views The documentary I Am Chris Farley looks into the highs and lows of the life of one of the greatest comedians of all time. A ...
What The 'Saturday Night Live' Staff Thinks Of The Chris Farley “Chippendales” Sketch 121.4k views Certain Saturday Night Live sketches have skyrocketed in popularity and become major cultural moments, but few sketches in t...
The Best Chris Farley Characters of All Time 1.5k votes Chris Farley was responsible for bringing to life some of the funniest film and television characters of all time. The best ...
The Best Chris Farley Movies 1.9k votes This list of the best Chris Farley movies is ranked best to worst and includes movie trailers when available. Christopher Cr...

Chris Farley is ranked on...

Chris Farley is also found on...