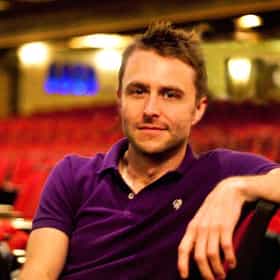 Christopher Ryan Hardwick (born November 23, 1971) is an American stand-up comedian, actor, television host, writer, producer, and podcaster. He hosts Talking Dead, an hourly aftershow on AMC affiliated with the network's zombie drama series The Walking Dead and Fear the Walking Dead, as well as Talking with Chris Hardwick, a show in which Hardwick interviews prominent pop culture figures, and The Wall, a plinko-inspired gameshow on NBC. From 2013 to 2017, he hosted @midnight with Chris Hardwick, a nightly comedy-game show series on Comedy Central. In 2018, Hardwick was accused of emotional and sexual abuse by his ex-girlfriend Chloe Dykstra. Hardwick originated the role of Stacee Jaxx ... more on Wikipedia

Chris Hardwick is ranked on...

#244 of 403 People who voted for Chris Hardwick... also upvote X-Men Franchise on The Best Superhero Movies Ever Made also upvote Shrek Franchise on The Best Animated Films Ever The Funniest Stand Up Comedians Of All Time 1M VOTES A ranked list of the best stand up comedians in the history of the art form. First and foremost, all of the people on this l...
#42 of 43 People who voted for Chris Hardwick... People under 30 are 2x more likely to vote for this Things That Aren't Nerdy Anymore 101.4k VOTES From the 1950s until the end of the 20th century, being considered a nerd was about as good as having the Black Plague. If y...
#16 of 68 The Best Celebrity Podcasts, Ranked 6.5k VOTES Grab a seat and relax, as it's time to rank the best celebrity podcasts. Though podcasts are nothing new, tons of celebs hav...
#43 of 52 The Game Show Hosts With The Most 6.2k VOTES If you're a fan of quiz shows like Jeopardy, then you probably already know how important a great game show hosts are to the...
#52 of 87 Guests You Hope to See on Late Show with Stephen Colbert 8.2k VOTES Late Show signed back on with Stephen Colbert at the helm in the summer of 2015, prime presidential election season, and the...
#41 of 53 Who Should Replace Jon Stewart as Host of The Daily Show? 6.9k VOTES UPDATE: On March 30, 2015, Comedy Central announced that Trevor Noah, The Daily Show correspondent since December 2014 will ...
#35 of 100 Who Is The Most Famous Chris In The World? 1.3k VOTES How many celebrities named Chris can you think of? The famous Chris's below have many different professions, as this li...
Childhood Photos Of Famous TV Show Hosts 9k VIEWS Whether they're witty, engaging, compassionate, or controversial, talk show hosts stick with a generation. From the greatest...

Chris Hardwick is also found on...